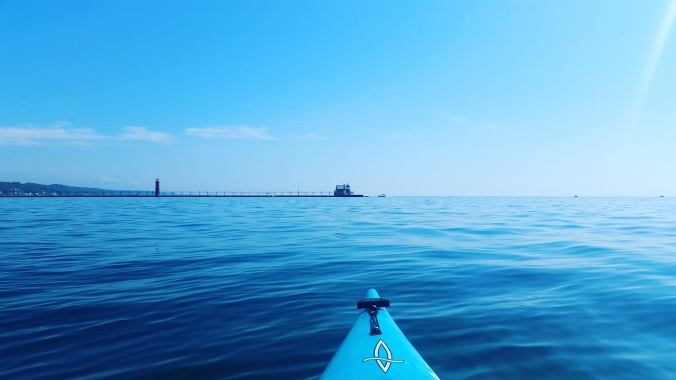 “You may encounter many defeats, but you must not be defeated. In fact, it may be necessary to encounter the defeats, so you can know who you are, what you can rise from, how you can still come out of it.” ~Maya Angelou

Coming off meeting my new friends King, Sharon, Susan and Lee…life on the Loop couldn’t have been better. I was rejuvenated. I was refreshed. Most of all…I knew nothing was going to stop me.

The next few days, I would have no reason to think differently.

Day 70 I left with a destination in mind for the 1st time in a long time. One of my Dad’s bosses, Jodi has been following along with my trip. She was generous enough to allow me to use her awesome beach house beach area to camp out for a very restful night. After the few 20+ mile days, and another perfect day heading to her place which was just a short paddle off Lake Michigan, life on the Big Adventure was moving right along.

On the way to her place, the people I met, continued to add fuel to the already red hot fire. With each new person I met added a new experience, a new story and most of all, a new friend.

1st there was Jenna and Becka who stopped me to ask about the trip and wish me luck. Then while floating and enjoying the Lake life, I met two of the coolest girls in Andrea and Jess. If those 4 weren’t enough, in steps Bob Linz or more known by his trail name as Oekaze. Bob has bicycled over 14,000 miles around the U.S. and wrote a book; ‘Godspeed: Riding out the Recession.’

I was riding high. Nothing could stop me…not even Jodi’s 8 foot breakwall, that from out of the Kayak, it took pure concentration to get up on the beach dry. It was the perfect end to yet another perfect day. Plus, I knew here…I could even sleep in a bit!

Well, only till the sprinklers went off that is. Nothing is a better wake up call then a little fresh water. I probably needed the shower anyway!

I was up and on the move for Day 71. I paddled the 4 miles back out from Norton Shores, and left behind once again the civilization of overpasses and houses on all sides…might be awhile till I see that sight again…or so I would think!

But, I would have no reason to think differently for the rest of Day 71. I was even in for a surprise when I called ahead to Grand Haven Marina.

“Sure you can throw up your hammock for the night. No problem!”

All I had heard about Grand Haven was how nice it was, and all the Chicago money that rolls into there…no way I thought I would be allowed to stay.

Everything was going my way. The weather had been perfect…the waves…what waves…the people amazing…even cheap Ice Cream on the boardwalk in Grand Haven…let’s just say I hit my groove.

After walking around and admiring the cool little center of the Grand Haven Boardwalk, and checking out the old Pere Marquette Train, it was time to call it a night. I knew they were calling for big storms the following night for the evening of Day 72, so I wanted to launch early.

After a night camped up right near the Pere Marquette, tucked away from the noise and lights of the boardwalk, I woke ready and eager to go. It was 4:30am and after a little quick breakfast I was off again.

Day 72 would reintroduce me to something I hadn’t seen in about 2 weeks…waves!

Nothing crazy, but the headwind was pretty strong and it sure made me realize quickly how fortunate I was for the long stretch of relatively flat water.

I stopped semi early at a little park and thought about calling it a day. I walked up to the wooden deck steps of the beach and found out it was where a Tom Hanks flix, Road to Perdition had some of its final scenes shot. It would have been the perfect beach to crash on for the night…but I wanted more.

Back out into the chop I went. The little break on Mr. Hank’s beach did me well, as I knew I made the right call as soon as I hit the water and felt refreshed again. It was hard to believe I had been fighting these headwinds all day with as fresh as I felt.

I rounded Port Sheldon’s breakwall and that’s when the surf really picked up. It was time to call it a day. I was shooting for Holland State Park, but the little beach at Kouw Park would have to do.

Just in time too, as that night although I slept through most of it, Mother Nature decided to dump 2 weeks worth of Michigan not having rain all into 1 night.

If that wasn’t enough, she would decide to do it again basically all day on Friday Day 73 as well. So it was time to plant roots for the day for my 1st off day in awhile.

The day was filled with reorganizing, a little reading and bumping into Scott and Cindy along with their two amazing kids Claire and Sam. The were the nicest little family ever, and after saying goodbye, I didn’t expect to see them on the following morning with the most heartfelt suprise.

After the rain cleared on Saturday morning, and I knew it was time to either set out or set up a mailbox at Kouw Park, I was preparing to launch. All of a sudden, I looked up and there this family of 4 was there waving and greeting me good morning. They had made a special trip back to the water to give me two homemade breakfast burritos, a banana and drink. I was blown away by their gesture and knew I was in for yet another great day…even with the Marine radio telling me about the growing waves throughout the day and Scott’s shocked face when he learned I was going to paddle in the Lake he was looking at. It was definitely a bit rough.

Rough enough thatI even quickly thought about turning around, shortly after I set out. After testing the waves and rough conditions my mind changed, and I settled into yet another great groove. I made the Holland breakwall by mid day.

Call it a day? Why…what would a little surf hurt?

They answer to that question I would soon discover in about 4 more hours.

The winds were rough, the waves big and growing, but the day had been great. Why would I expect anything different for the rest of the day.

I would soon start to fear the worst though about 2 miles from the Saugatuck Breakwall. Something wasn’t right with the Kaboose. I kept having to stop and pull it close to keep adjusting it. I knew something was wrong, but my choice was to paddle the 2 miles in or try to beach on Lake Michigan’s shores in huge waves. I just had to hope and pray my thoughts of trouble were wrong. Maybe my gear just shifted funny inside…let’s hope.

That hope would soon drift away. I pulled into the refuge Harbor in Saugatuck pulling what felt like a million pounds. By this time I feared the worst…but had no idea how bad it really was. That reality came when I opened the lid and almost the entire Kaboose had filled with water. It somehow developed a leak and only a bit of the top wasn’t under water.

The 1st thing I reached for was my camera dry bag.

Not a good sign when the outside of the bag was drenched.

And my Nikon bag poured out nothing but water….

Quickly I reached for my next “important” dry bag…my Goal Zero.

Not only did the Goal Zero suffer the same fate…it was actually melting itself…it literally was catching fire and melting!

All of my electronics stored in my Kaboose…done. There was so much water the dry bags didn’t stand a chance. How it leaked…I’m not sure. All I knew was that it was one major setback.

Funny thing is, my spirits were and are still high. I knew I had found my groove and I still feel like nothing can stop me. Nothing I did could have prevented this from hapoening. This is just another hurdle I have to jump, and luckily I have some great people behind me. My Aunt Linda, Neil, my cousin Mike and his wife Jan and my Dad’s side of the fam who fortunately lived near by jumped into action and saved the day…but more on them in my next post.

For now, I will have to take a step back and figure out how to go from here. A lost worse could have happened, but to lose $1,500 bucks worth of gear in a couple hours of an afternoon sure deals you a blow. Especially, when you know you are already trying to finish the whole 2 years of the Loop on a budget.

As rough as it sounds, my hopes are still high though. I know I will complete the Great Loop…in some way I will regroup and come back better than ever…ready to go and fight yet another day. For now…it’s time to assess the situation and see how to go on from here. It’s about picking up the pieces, and rebuilding along with the friends, family and amazing support team that has been behind me since the beginning. There is no quit…but for now…Chicago…you will just have to wait…don’t worry…I’m coming for you though!

7 thoughts on “Trouble in Paradise”