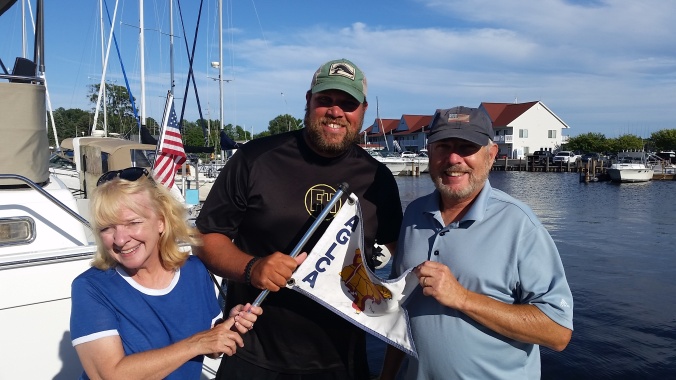 And a truer phrase could not have been spoken. But we will get to King and friends in a second. 1st we have to back track to Saturday.

Saturday was Day 67 and after a great night in the Nordhouse Dunes it was off to Ludington. Little did I know of the welcoming that I was soon to find there. Shortly after pulling into the marina (and a beautiful one at that), I was well into probably my 3rd pbj as a lady shouts over at me from the other picnic table…” So where ya going?” This would be my introduction to Jane.

Within the 1st 30 minutes after meeting her, I think the whole marina knew I was the guy paddling around the Great Loop. She instantly became my new PR spokeswoman. Her and her group of “ladies” where having a great Saturday night and enjoying a couple cold ones.

And then…there I was…in my hammock updating my journal. I see a lady in the parking lot walking towards me and I think, “Geez, I must look really good in the dark.” But, she instantly darted a different way when she saw me look over.

Back to writing…maybe a minute goes by and I hear “ribbet, ribbet”. I giggle like a little school girl, because I know the girl in the parking lot was none other than Jane when I heard the frog. She asked earlier if I liked frogs, and at the time I thought it was a strange question. Well, a dollar store frog later…it all became clear. It was her valiant effort to try and scare me…but hopefully she steps her game up next time!

The rest of the night was spent on the docks with her and her crew, a couple of beers, a butterscotch concoction, chocolate chip cookies and a now “croaked frog”. A perfect way to end a perfect day in Ludington.

Spirits riding high, Sunday Day 68 I was up and ready to go. To top it off, I got to paddle out along side the huge Badger Boat that shuttles passengers to Wisconsin. That’s definitely something you don’t get to do paddling back home in Ohio.

It couldn’t have been a better paddle and I figured I would try and call it a day in the town of Pentwater. The weather was picking up and waves were getting rough.

Only problem was…Pentwater Marina didn’t allow camping because of a city ordinance. The guys at the private Snug Harbor Marina were awesome and tried hooking up a spot at a lady’s outlot down the way. A mile or so paddle back there was all but in vain, as I found I had no way to get my boat out of the water.

“You can’t paddle on! The next town isn’t for another 30 miles,” the Snug Harbor guy said while looking at me like I was nuts. But, I was all out of options and running out of day light. I had to go.

Then…just like in the movies…the hero steps in. Cue King Cole.

As I paddle by the boat ‘Lazy Susan’, I said hello, as I saw they were Loopers too. As they start snapping pics and chatting with me on my way out, King asks me where I am staying.

“You aren’t going anywhere,” King instantly responds and starts racing to show me the way to his boat, ‘Blue Moon’. He starts helping me unload my gear and get situated, all while making me feel like he had rolled a red carpet oUT for me the whole time.

He invited me to come over with the other Loopers for a couple drinks and dinner. He and his wife Sharon presented me with their own Looper flag, as he said it will make the world of difference for me on the loop. I think if I needed a shirt, he would have given me the one off his back too. That’s just the kind of guy I was learning King was. He reminded me so much of my Grandpa, and we all know what I thought about him.

While with the crew of 8 other Loopers, I also had the pleasure to meet Susan and Lee. Getting to talk with them about teaching, kids, the loop, life and everything in between was such a joy. If just getting to know them wasn’t enough, they insisted on picking up my dinner tab!!! And people say there aren’t great people in the world anymore…Susan and Lee burst that theory a hundred times over.

I headed back to the ‘Blue Moon’ to update my journal after dinner, while King and Sharon decided to check out the live band for a bit of music and dancing. I have always said if I got married, it would be for the long haul. Now, if I did…it would have to be with the goal to be, as happy as King and Sharon are after 49 years together. They were teenage sweethearts and after a few years have gone by, it is still like they just met. Such an incredible couple!

Just when you would think that a guest bed on the boat, a dinner invite and a few great new friends were enough…King pops out of bed in the AM and starts whipping up the best breakfast I’ve had in what seems like years. Eggs, toast, fried potatoes, bacon and cold brewed coffee. I was living like a King!

I set off on this adventure to meet people…Sharon, King, Lee and Susan are exactly those friends that make this journey worth it. Without their support and help in Pentwater, who knows how long that Sunday would have turned into. Now I was refreshed again and jacked up on a great dinner, breakfast and of course coffee.

And let me just say…caffeine is a hell of a drug!

Monday Day 69, I paddled like there was no tommorrow. I felt like I could have made it to Chicago if I just started to cross the lake. But I figured…hey, let’s not get too crazy. Instead, I just jetted all the way down to right before White Lake, a big 30 mile day. I found the perfect camp spot right on the beach outside of a golf course. I just hope for the night that no one hits tee shots like my dad…otherwise I might need a stronger tent roof!!!

Along the way on that Monday, the highlight was meeting Cheri  Schaaf. She is a biology and chemistry teacher from Madison, Wisconsin who was out enjoying one of her last few days before the school year started back up again.

It was such a thrill getting to hear about how she and her Husband had spent a year in a hut deep in the jungle for 2 years as he did research. Most people think your nuts when you say you plan to camp for 2 years on a Great Loop adventure, but not Cheri. The more we talked…the harder it was to refuse her generous offer to let me crash on her beach for the night…but the night was perfect and Lake Michigan called my name.

As I paddled the rest of the way to that golf course, only the setting sun on the last few minutes of my paddle, could truly put a stamp on what was a few of the best days ever. The people, the places and the continuing love and support I have gotten along the way, has been what continues to make me long to see what The Loop has in store next.

Some childhood stories always seem too good to be true, but as for King Cole and this chapter of the adventure…it has been, all I could possibly have dreamed it to be! 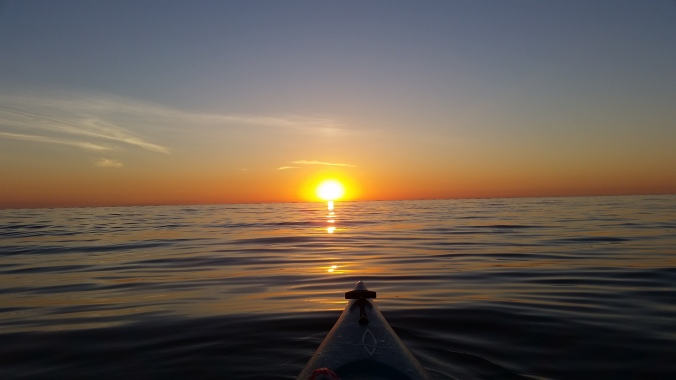 2 thoughts on “Ol King Cole and Other Tales”