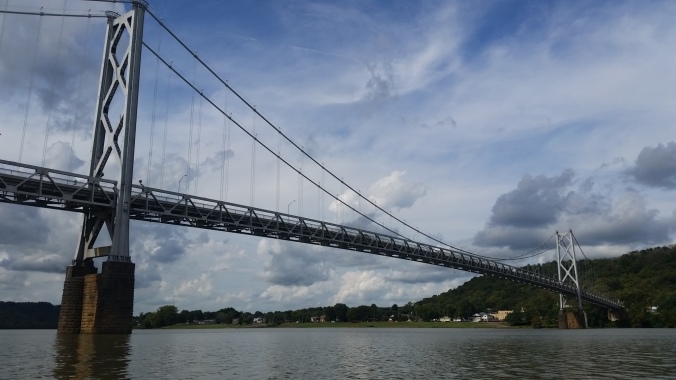 About a year ago, I was driving back to Michigan, from a road trip to Maine. On my way back in Erie, PA I stopped to give a lift to an older homeless man, Curtis as he held up his Ohio sign. After offering him the ride, little did I know, that 5 hour car drive probably did more for me, than for him.

On that ride we shared stories, exchanging one after the other and getting to know a complete stranger, all while trusting in humanity and the joy that the company of another can bring.

On that ride he told me, after being all over the country, Ohio and Michigan were the two states in the U.S. filled with the nicest people. He said there might be great people everywhere, but when you’re in Ohio and Michigan, people in general are just kinder. Curtis…I can truly agree with you 100%

I started my trip in Michigan, and was blown away by the support and generosity of people who went out of their way to lend a hand and help me out on my journey. Now with detouring my trip to Ohio, I have found Curtis’ statement to hold true. So many wonderful people in these 1st few days back on the water have been there, to make this trip so easy to fall back into.

Starting with reaching the Ohio and the Anchor Pad Marina I talked about in my last post. Joe was the best, 1st tour guide on the Ohio a guy could ask for, and getting to spend the next morning with Tom, chatting over a good cup of Joe…jump-started my Ohio River leg of the adventure.

Having driven over the Ohio River in many different places, at many different times, I think most take for granted the real beauty that hides along each of its magnificent riverbends. The paddle has been lined with trees and the picturesque rolling hills. The banks, teaming with scores of birds from cardinals and endangered hawks to the great Bald Eagle. 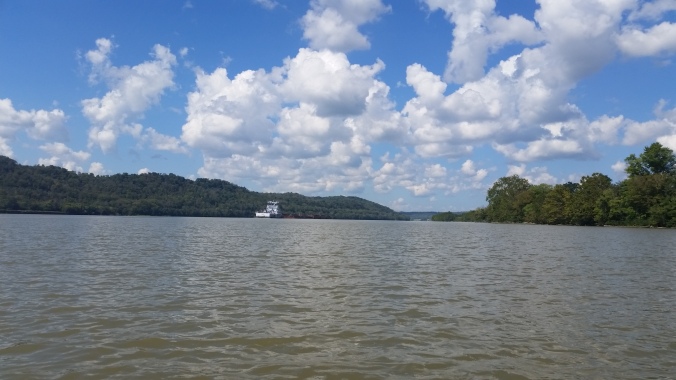 The beauty on the Ohio River

Paddling next to the huge barges, has been a new experience and one I’m beginning to get pretty familiar with. I’m still in awe, everytime one of the huge ships pass by, as the carry out their daily work.

I spent my 2nd night on the Ohio River in my hammock along the banks right after Vanceburg. They had called for rain, but I lucked out all night…it probably was because I was prepared with putting my tarp up. It never seems to rain when you’re prepared for it.

The following night on Saturday, I wasn’t so lucky, and had to stop at the 1st place I found to pop my tent up in the rain. 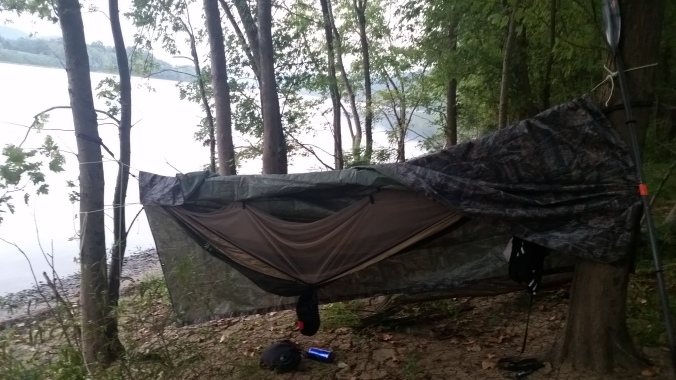 The Grand Trunk hammock…all set up for the rain that never was.

That night I also made a dumb move. I deleted my river maps that I had downloaded on my phone. For most modern people…no big deal…just download them again. Well not with this guy. With only my flip phone, I only can download and use my deactivated smartphone on WIFI. No fear….the nice Ohio people again to the rescue. The following morning I met Jason Kay. He is an Army and Navy vet who was doing a little early morning fishing. Lucky for me I bumped into one of the nicest guys ever, who offered to drive me to his house when I asked him if there was anywhere in the little town of Manchester that I might be able to steal WIFI. Without him, I would have had to Lewis and Clark it. We shared a few stories on the ride, and my adventure definitely added one more friend with bumping into him. Thank you for your help and your service Jason! Both are definitely appreciated!

Jason and I in Manchester

Another great paddle day followed after departing from Manchester. After a brief stop in Maysville to see the sights, it was the people of Ohio, who again put the stamp on a marvelous day. I called ahead to the Ripley Boat Club while sitting in Maysville to see if I could pop up my hammock for the night. They welcomed me and it was time to try and make it there before they left for the night at 8PM. I paddled like my life depended on it, and even though I pulled in only a few minutes before they closed, Jack and his crew made sure to roll out the red carpet when I arrived. Jack took me over to the grill to make sure I was able to get an order of food in. The girls working the restaurant all were super kind to fill my order, even being right before close. Then Jack went even above and beyond. Rather than have me pop my hammock or tent, he lent me his RV to be able to shower and get a great nights rest. He is truly one of the best guys you possibly could run into! The world could use a few more Jacks.

Monday, I took advantage of the comfy bed and slept in a bit till about 7:30AM. I wanted to go take a walk through town and see the old John Parker house. His story is pretty amazing, and well worth the history lesson to look him up.

When I got back to the boat club, Jack was there to say goodbye and wish me the best. It was truly an honor to get to meet him.

One of the highlights of the Ohio River trip so far has been getting to see the John Rankin House from the water. As I paddled across one of the widest sections of river I have ever come to yet, it just blows my mind to think of how so many people crossed that river to attempt to earn their freedom. Each bend of this river has had a story to tell, and truly keeps giving me one history lesson after another.

Next up, there was a stop in the little town of Augusta, that flashes you back to the 1800’s. My brother-in-law Lee had told me about this little town and is well worth a stop. I saw The Rosemary Clooney house and a beautiful old town, that deserved more than the couple hours of the afternoon that I gave it.

After debating about staying in Augusta, I decided to paddle on, to cap off the end of the day with a late evening paddle. Lucky for me that I did, as I got I to pull into the awesome little floating resturant that is the Fat Boy’s Dream Floating Resturant . It was here that I was privileged not only to a great meal, but to the meet two wonderful women in Bev and Whitney. They went above and beyond making calls for me and arranging a place for me to stay. I was just happy for the meal, but they made sure they worked out a place for me to stay, so I wouldn’t have to worry about finding something.  I can’t thank these two enough for giving me a place to crash. To top it off, Whitney even messaged me in the morning and offered to bring me out breakfast. It is always so humbling to receive so much kindness.

I guess in the end, it takes me back full circle to that car ride. That ride made me look at people in a whole different way. On something as simple as my drive back to Michigan, I was able to make someone’s day the same way countless others make my day everytime they lend their generosity to me…a smelly, Big, wet river traveler. None of you have to do anything for me, but yet you all continue to blow me away and go above and beyond any kindness I could imagine. There are so many great people we never hear about everyday…but you guys are what gives me hope in the future!

I took a lot of things from that car ride, but one thing I can say for sure now with my own experience is that, Michigan and Ohio people are amazing. Maybe they will be everywhere else too, but the bar that the people in these states have set is very, very high, and maybe a hard one to surpass. Thank you all!