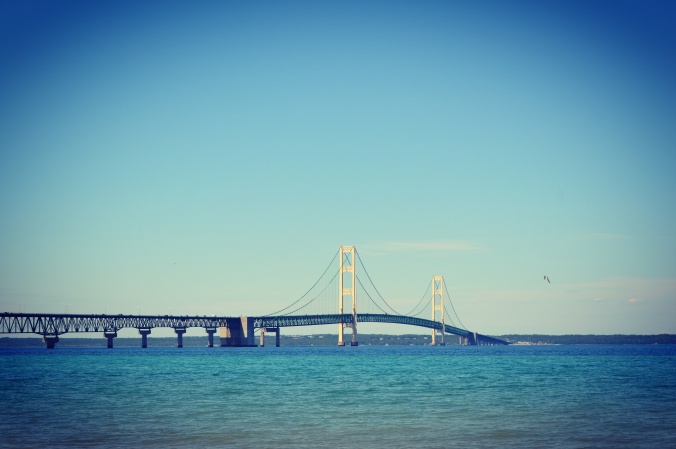 Well this week has taken me to the top of the mountain, and then tumbling back down. I guess it’s good to stay humble and the trip this week, made sure it did just that for me.

After staying for an amazing fireworks display on the 4th in Mackinaw City, I was amped and ready to go Tuesday. It was the day I got to paddle under the Mackinac Bridge!!! That is if bridge security didn’t have something to say about it.
Still, I was bound and determined to paddle under one of Michigan’s biggest landmarks. Being a Michigan boy, Tuesdays paddle might have been more exciting for me than if it were the Statue of Liberty.
Closer and closer I got…no security over the Marine radio..it was go time! Or so I thought.
The bridge had other ideas, as the monster that lives under the bridge is disguised as an enormous head wind that funnels right under that thing. It was a bear to paddle through, but…I came out the other side and into Lake Michigan!! I probably have never been more like a kid at Christmas while paddling anywhere. Not only is the bridge magnificent in itself, but knowing I completed leg 1 was just the icing on the cake.

After a paddling a bit longer for the day and getting to meet little Piper who was out paddling with her Dad, I made it to the Headlands. I popped up the hammock to cap off the end of an amazing day and an emotional high.

Day 36 called for rain, but I took a chance and won. No rain in sight, wind at my back and a beautiful day to paddle was  ahead. I made it all the way to the eastern tip of Wilderness park, and offically turned south! Spending the night in Sturgeon Bay knowing I was offically on my way to the coast was an exciting feeling.

Thursday day 37 followed with another beautiful day and I could feel everything gearing up for a great leg 2. I was gaining momentum, confidence and nothing could slow me down!

Well except the thunderstorms that would roll in on day 38. All day, Michigan was hit with one big storm after another. Yet, I looked at the bright side and holed up in my tent, finding the opportunity to read my book about Peter Jenkins and his walk west. Not to mention the 3 inch hail other parts of the state got, that had just missed me and my tent. That was probably my best luck of the whole trip.

About 3pm I had a clear window and made a few miles. Another day…and another successful day at that, ending just before Goodhart.

Then comes day 39. The sky was beautiful. The weather gorgeous, but the waves…4-7 footers one after the other. Not really a day to head out and paddle. So I stayed and read a bit more…then it hit me…I have never swam in Lake Michigan! That had to change!!!

I felt like a 3 year old again in his GI Joe underroos at the beach growing up in Florida. I grabbed my mask and snorkel and had one heck of an afternoon…maybe too good.

Riding the high from the flashbacks I got from my childhood, I decided to chance the wind and the waves. The sun lured me in. It was too beautiful of a day to take a 0 mile day…I had to go. Boy would I regret that decision…but that’s all for another story!

3 thoughts on “The Bridge and the Roller Coaster”